Jamma put their artists on the big screen through the launch of a national partnership with The Everyman Cinema Group! 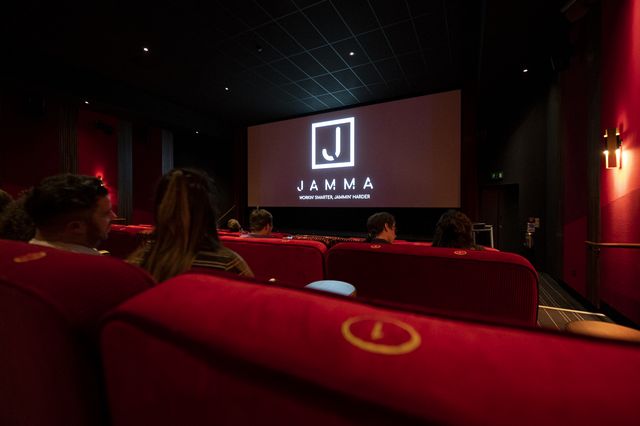 Jamma is all about putting the artist front and centre, that’s why we have teamed up with our friends at Everyman cinemas to launch ‘The Everyman, Everyjam!’ - a concept event that puts Jamma artists on the big screen and helps blow them up across the entire county!

The ‘Everyman. Everyjam’ launched at Everyman Cinema, Wokingham on 4th Nov’ 2020 and gave 3 Jamma solo artists and a full band band the opportunity to record a professionally shot and edited performance at Generation Studios (one of our studio partners in Maidenhead, UK) which was then played to a sold out crowd on the big screen at ‘The Everyman, Everyjam!’ - cool eh?!

Think about it, we hit the nail on the head with this one... with ‘The Everyjam’ we are giving Jamma artists the ability to perform (and get paid), while working with partner studios at a discounted rate AND then giving everyone involved national exposure through big screen concerts across the UK under The Everyman brand - now THAT’s Jamma people!

Fancy dinner and a bottle of wine while you sit in a lounge style environment and watch a movie? Or maybe even one of Jamma’s own branded ‘Jammatini’ cocktails created by brand partner ‘Tin & Glass Events’ (www.tinandglass.co.uk) No problem! - you can at Everyman Cinemas.

These guys are super cool and currently have 39 cinema’s with multiple screens all across the UK and we love the vibe… seeing an artist on the big screen at one of their venues is like being at a live jam, and don’t even get us started on how good their sound is, wow!

Check them out if you haven’t already and make sure you get yourself down to the next ‘Everyjam’ to party with us and check out some of the best UK talent.